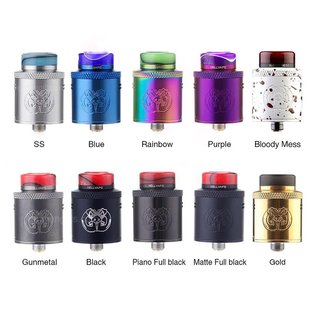 Hellvape and Heathen have collaborated with The Vapor Chronicles in order to spawn the Drop Dead 24mm RDA. A 24mm diameter, four post build deck with gold plated positive posts, 5mm deep juice well and a redesigned airflow inspired by TVC. The Drop Dead has four posts that allow for single or dual coil builds which are secured with either the pre-installed Flathead screws or the included Phillips screws. Unlike the original Dead Rabbit, the Drop Dead is designed with 14x 1mm air ports on each side that lead into a downward sloping airflow that maximizes flavour and minimizes leaking. The airflow can be adjusted for both single and dual coil options.

Add your review
0 stars based on 0 reviews